Alzheimers: The tale of two Robertsons


As a rule, I don't pay a lot of attention to Evangelist/Talk Show Host/Politician Pat Robertson. This week, however, he got my attention when he answered this question from a viewer . . .

Robertson's comments are the beginning of a slippery slope of ethical issues that can confront a marriage. People change in marriage even when there is not a physical cause for the change. I am a much different person than I was 13 years ago and possibly not the man Amy thought I would become. When I got married, I thought I would be at the company I was working at until I retired, much like my Dad did before me. But 5 years ago I lost that job which led to the journey I am now as the primary home educator of the family.


His phrase Alzheimer's is a kind of death is a chilling one. You could replace Alzheimer's with mental illness, Lou Gehrig's disease, cancer and even joblessness if you wanted. While all of these change a marriage and often not for the better, they are not a reason for divorce.


A different perspective comes from the example of Robertson McQuilkin who was president of Columbia Bible College and Seminary (Now Columbia International University, which I attended in 1995). In 1981 his wife was diagnosed with Alzheimer's.

His decision was to retire from public life including his president ship of CIU in order to care for his wife. Listen to his resignation speech. It is a rebuttal to Pat Robertson's response. Except it was delivered 2 decades before Robertson. It is the Godly response of a man who so obviously loved his wife.

Mcquikin gave that speech in 1990 and took care of his wife from then until her death in 2003.


His phrase "it's not I have to, but I get to" is such a different thought than Pat Robertson's response. What if the Robertson from Virgina answered the viewers question by citing the response of the Robertson from South Carolina? He certainly wouldn't be the subject of ABC news reports and hundreds of comments on the 700 club FB page, but he would be much better grounded biblically. Which presumably, is what his 700 club viewers are tuning in for.


On a more personal note, about the same time Mcquilkin was dealing with his wife's Alzheimer's, my grandfather passed away of a disease that for 2 years masked itself as Alzheimer's. Before that most people in my family figured my robust grandfather would outlive my frail grandmother .


But in the 2 years that my grandmother took care of my grandpa a transformation took place in her. She was put in a situation that tore her apart but in the end made her a stronger and more vital person. My grandfather died in 1989 and this "frail" woman he left behind lived 16 more years remaining active in the lives of her children, grandchildren and great grandchildren. In 1989, I did not know my grandmother very well; being 1 of 30 grandchildren will do that to you. But in the last act of her life, we spent much more time together. My older two children spent much time with her. During the last few weeks of her life she would come in and out of consciousness. One night my wife overheard her having a conversation with God. She was telling Him that she could not go yet because there were still great grandchildren she had not met. One of those great grand children she was referring to was Puppy who was born a few months after Grandma died. I believe the experience of caring for her husband was at least partially instrumental in her strong finish in the last act of her life. 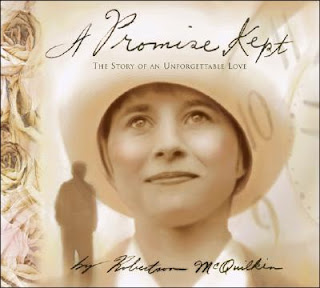 McQuilkin wrote an excellent book in 1998 about 20 years into Muriel's illness, about his wife and his decision to care for her. A Promise Kept is not only the name of the book, but it also defines what McQuikin, my grandmother, and so many others did through the years. Pat Robertson shrugs off those vows in the video while so many others have embraced them.
Posted by Just Plain Dave FKA Home School Dad at 8:00 PM 11 comments:

The Good Fruit, and the Ugly

First fruits of the season, yum! 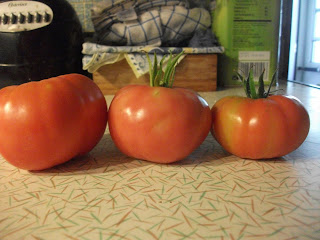 Someone found our roof yummy too! 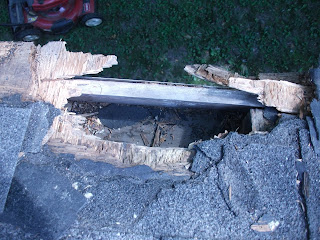 The main reason why I have stopped blogging for the next few months is time, specifically my lack of it. I still get 168 hours a week, like everyone else. I just don't have any extra time for non-essentials. I may have time to do a 1/2 way job on my posts, but not enough time to make the posts as good as I want them. So taking a hiatus seemed the best choice.

Well today due to a schedule glitch, I see that I have an extra 15 minutes at the library and time to produce a post. As you see how little I write in 15 minutes you will see why blogging takes up so much of my time: I do it slowly.

School started 2 weeks ago and has been going pretty well. The past few days I have been in excruciating pain with a recurring neck injury. So, we haven't got as much accomplished as I would hope. Puppy is in kindergarten and I am trying to keep her active while working with Spider Droid and Bunny.

We are in the midst of what we call birthday season. Bunny turned 12 over the weekend. Amy and I have birthdays this month as well. Our co-op begins next week and the kids new classes seem really cool. Awana started today. And Spider Droid's soccer games start Saturday. I am working a full time temp job 2nd shift for the next 13 weeks. Add homeschool and church and you have a busy life with no time for blogging.