Training for the Burpee Challenge

What you see in the video  may look like our family is running the bases at a minor league baseball game (Kane County Cougars)  It is actually Puppy training me for the Burpee Challenge.  You can't hear her but she keeps on repeating the words of  Herb Brooks, Coach of the 1980 US Olympic Hockey Team.  "The legs feed the wolf, gentlemen!"   As Puppy tries to fashion our athleticism after the gold medalists, she finds it extremely important to imitate their training methods as well.  At the game she wanted me to do a burpee at home plate.  I refused.  Believe me her discipline was pretty similar to Herb's.

Posted by Home School Dad at 1:55 PM No comments:

Starting in just 2 short weeks both adults in this house aka parents, will be working full time, albeit different shifts. To prepare for that, I'm assessing what the kids can do food-wise, and "certifying" them in each area.  Puppy's list so far includes, Certified egg cracker (she's amazing), Certified sausage cutter, and Certified macaroni assistant.  Bunny has quite a few certifications that we need to get written down, and Spider Droid makes a mean peanut butter sandwich.  Here's someone getting ready for the mac-n-cheese certification test. 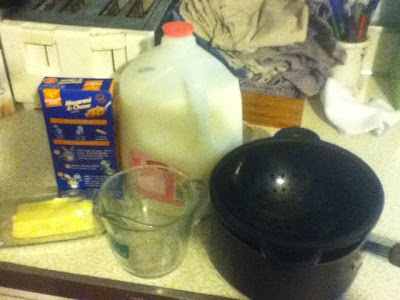 Lest you think I've forgotten about the Burpee Challenge, alas, I have not!  Puppy has gotten herself a whistle which will aide in my speed of burpees.  More photos, videos, and commentary on that score later.  How many burpees can YOU do? (I think I'm up to 6.)
Posted by Home School Dad at 2:50 PM No comments:

Yesterday, (actually) earlier today I told you about my burpee Challenge.  I Hope to be able to do 25 Burpees by my birthday which is 64 days from now.  Thus I am calling it the burpee Challenge 64 to 25.
In yesterday's post I wasn't quite sure what a burpee was.  Well, I have gotten myself a personal trainer, who will now show you how to do a burpee.
I don't expect this blog to become the Burpee Channel: All Burpees ALL the Time.  I will keep you up to date and will put any videos (including this one)that  are Burpee related up at Dave Out Loud as well.
Speaking of videos, searching the Burpee Challenge brings up a number of videos on You Tube.  Here is one of them:
I DON'T EXPECT MINE TO BE THAT IMPRESSIVE
Posted by Home School Dad at 10:26 PM 2 comments:

Email ThisBlogThis!Share to TwitterShare to FacebookShare to Pinterest
Labels: Burpee Challenge, Our Other Blogs, Puppyisms, Videos

It's Time for Six Word Saturday at Show My Face Dot Com.

I was driving in the car today with Amy and the family and Amy mentioned doing burpies in Jr. High or High School gym class.  I told her I didn't know what a burpie was.  I some how got roped into training to do 25 burpies by my birthday which is 64 days from now.  SO  Sunday, September 23rd my 48th birthday I will be attempting 25 burpies.  Hopefully, I will know what they are by then.

Puppy likes Ramen soup. So much so, she sometimes asks for it for breakfast. Puppy pronounces ramen, robin. She pronounces thanks, hanks. So I didn't really think that she thought they put robin in the soup.  This week Amy described this conversation she had with Puppy.

Puppy: Mommy can I have Robin soup for breakfast?

Amy: Sure. It's ramen soup not robin soup.

Puppy: Ohhhh. (After some thought ) I guess if they put robin in it, it would be more like a stew.

The next day I was at my folk's  house explaining the above to my Mom.  My Dad walked in the room and said "don't watch anything with me in it this week."

"If Christians would run more programs like Safe Families,  DCFS would be put out of business. " -the director of the Illinois Department of Family and Child Services to Dr. David Anderson Executive director of Lydia Homes and creator of the Safe families program.

For More info about the Safe Families program click here.

That's all the fragments for today.  For more Friday Fragments head back to Half Past Kissin' Time.

Change can be good.  Why Homeschool is hosting the Change edition of the Carnival of Homeschooling this week.  Both Dave Out Loud and Home School Dad have submissions.  Be sure to check those out amid all the excellent carnival doings.
Posted by Home School Dad at 12:46 AM No comments:

Email ThisBlogThis!Share to TwitterShare to FacebookShare to Pinterest
Labels: Home School Carnival, Our Other Blogs

It's been far too long since I participated in Six Word Saturday at Showmyface.com.  I talked about my new job in my last post.  I didn't mention that I am earning minimum wage for the job.  This fact gave me two (count them) different six word reflections . . .
Haven't made minimum wage since 1996

I prefer the second one because it require more math.  It also puts a more positive spin on it.  That's 20.625 cents a minute if I can get some overtime going.

I am gainfully employed. I have been trying this summer to get a temp job. I finally got 1 this week and it has the potential to go beyond the summer and not interfere with homeschooling. So I have the potential of working 2 jobs for a while. Homeschooling has many non monetary forms of payment. But a steady paycheck is going to come in handy. 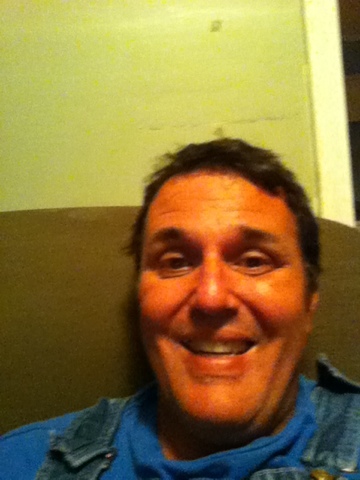 Fragments of rants, thoughts, and feelings. 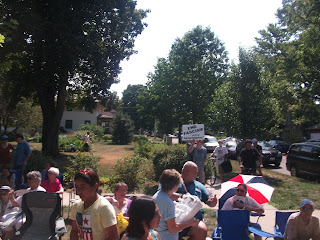 Fragment 1: Stupid is a swear word in our family.  It is not a word that we want our kids to use nor  do we use it ourselves. It's a crippler.  And it's everpresent.  Consider these lyrics from the beginning of Book Report from You're a Good Man Charlie Brown:
"Peter Rabbit is a stupid book about a stupid rabbit who steals vegetables from other people's gardens."
Be that as it may, stupid things fascinate me.  I don't mean that I am fascinated by things that nobody else finds interesting.  That is true.  I am very random, and the oddest things do strike my fancy.  What I mean is the nonsensical things that people say and do fascinate me.  Nonsensical is a kinder gentler way of saying stupid.
Before, I continue with fragment 1, let me digress. This whole introduction to fragment 1, is a fragment to itself.  So let's call it a prefragmenace (part fragment part preface).
At the 4th of July parade I described in my last post, I saw one illustration of the nonsensical.  It was a sign that a man was carrying in the above picture.  I have isolated the sign below. 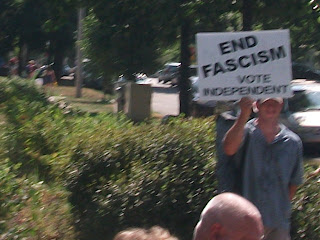 The reason why I think this sign is stupid nonsensical is mainly because it doesn't make sense.  Voting independent will not end fascism for a number of reasons.
Fascism is defined at dictionary.com as  a governmental system led by a dictator having complete power, forcibly suppressing opposition and criticism, regimenting all industry, commerce, etc., and emphasizing an aggressive nationalism and often racism.
So A,  if the U.S. was a fascist state, this mans opposition  and criticism of it would be forcibly suppressed.

B, our governments checks and balances and our current 2 party system and free elections  show that we have no dictator leading us.

C, voting independent will not necessarily keep us from a fascist state.  Imagine a fascist running as an independent.  His plan to get in power and become a dictator. Voting independent in that case would actually put a fascist in office rather than remove one from office.
Fragment 2:  Not  all isms are Puppyisms.
Bunny Girl just walked into our bedroom and said that she was thinking and when she was done thinking she began thinking credits.   Then she walked out.
Fragment 3: Obligatory heat wave post.
It's been hotter than heat itself for the past week or so.  It is 10:30 at night and the temp have finally dipped to 85 degrees.  It was 104 at 3:00 when we left the swimming pool  I am not sure how I feel about these real feel forecasts.  It is 85 now, but it feels like 95.  Who cares how it feels? What's next  if were at work at 2:00 in the afternoon but it feels like 5:00 in the afternoon, are we supposed to leave for the day?  It's anarchy I tell you.  And if there's anarchy, can fascism be far behind?
For more fascism free fragments head back to half past kissing time.
Posted by Home School Dad at 10:51 PM 6 comments:

2 questions for the 4th of July

It has been quite a while since I participated in Thursday 2 questions at Self Sagacity. My independence day activities have given me few questions to ask.

I marched in a local parade today and actually had 3 separate invitations to participate. 2 political candidates (one a homeschooling father, who I will be featuring in a future post) needed marchers but I ended up marching with Spider Droid and his robotics team. 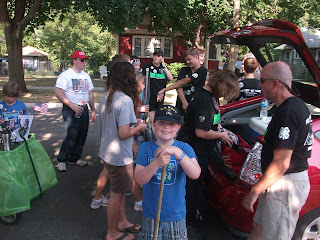 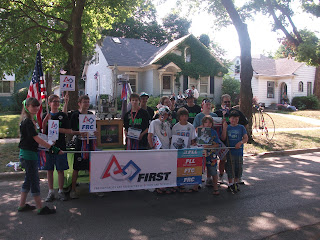 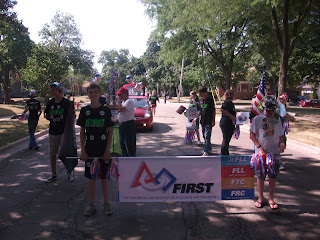 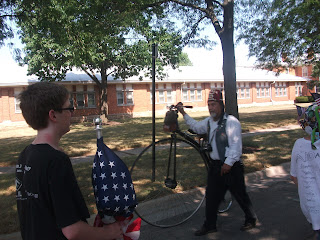 This cyclist was in the group behind us. Right before the parade started his horn sprung a leak. Some of the robotics kids gave him a few I love robotics stickers and he patched up his horn easily. That was honking cool.

I asked myself question 1 on my way to the parade. As far as I could recall, before today the last time I walked in a parade was in a 4th of July parade in 1990 in Macomb, Illinois during my time at university there. What was unique about that experience was that a Christian group that was marching in the parade needed someone to carry a full size cross in the parade route. I remember this having a powerful spiritual impact on me, as I was able to reflect on how Jesus carried the cross in preparation for paying for my sins through his death and resurrection.

Question 2: What is your favorite part of the 4th of July holiday? 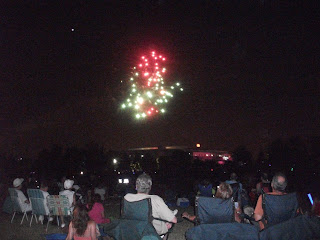 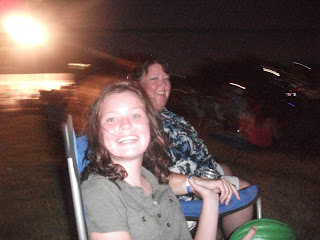 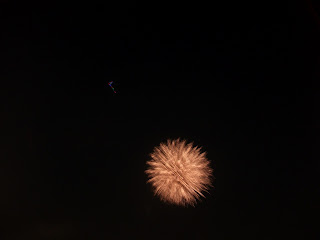 For me it is going to see the fireworks. It's not exactly the fireworks themselves, which were fantastic this year. It is actually tossing a ball or a Frisbee with Amy or the kids prior to the fireworks. Just a simple act of familial affection in a sea of patriotism and excess make me realize how much I "depend" on my family.