Ever since I was a boy, I have had a dream.  It is a typical boyhood dream, but nevertheless, it was my dream .  I wanted to work for a baseball team, specifically  for the Chicago White Sox as their starting third baseman.  It turns out I was not much of a ball player.  I wasn't even a starter on my little league teams. Over the years I modified that dream somewhat.  I dreamed of perhaps being a broadcaster, that way if a job at 3rd base ever opened up I'd be ready to take over.

A few years ago my brother had a Confirmation party for his daughter at the party suites of a local minor league team.  He shared the suite with a neighbor whose daughter had also been confirmed that day and is the operations manager at the ball park.  My brother introduced me as a guy who is passionate about baseball and whose dream job would be to work at a ball park.  He didn't mention the part about 3rd base probably because there's not a lot of rookies in their 50's.   His friend mentioned the possibility of a job  an usher.  I thought that might be a good job to consider for the next summer.  The next summer was 2020 and there was this little thing called Covid, maybe you heard of it, and since there was no season there was no where to ush. 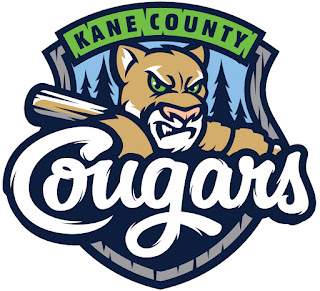 Eventually things got a little bit back to normal ,and by April of this year, I was back to working my pre covid jobs as a substitute teacher and  cashier/usher at a local movie theatre.  Last week the school year ended and on one of my last days at school my wife called me and said she had a crazy idea.  I love crazy ideas, so I was all ears.

"The Kane County Cougars need concessions worker this summer, you and I should get jobs there." she told me.  I told her that was not a crazy idea at all and we both  applied that day. When I was applying, I saw they were also hiring 15 year old's with a work permit.  My 15 year old daughter was also looking for work. so she applied as well.  In short order, we all received emails from the Cougars and  were scheduled for interviews.  Lucy's school year ends a week later than the district Amy and I work at so we scheduled the interview for the day after her (Lucy's) school ended.  When the interviewer saw that we were all in the same family he took us all in together.

Lucy, had never been interviewed for a job before but it became obvious to Amy and I pretty early in the process that we were all going to be hired.  It wasn't until we were leaving and the interviewer said very clearly that we'd all been hired that Lucy realized it.  She was ecstatic and couldn't believe it was that easy to get a job.  Amy and I will be working as cashiers and Lucy will be working in the picnic area.  As we will only be working home games, it still gives Amy and Lucy quite a bit of vacation time this Summer and I will be able to work out my schedule at the theatre so I can work both jobs.

I have always kind of felt bad for people who work concessions at the ball park as they can't enjoy the game as they are helping others to do the same thing.  As I prepare for this job, I look forward to going to the ball park every day and being part of the festivities.  Even if a third base position doesn't open up sharing this job experience with my wife and daughter make it a dream job.

The views expressed on this website/weblog are mine alone and do not necessarily reflect the views of my employer.