The Most Important Job at the Food Bank

Last month we started volunteering as a family at the Northern Illinois Food Bank in Geneva, Illinois.  Technically speaking our youngest can't volunteer until she turns 8 at the end of the year.  Today we trekked over there, sans our 7 year old, and spent 3 hours working with a team of about 15 volunteers transferring cereal from a 1600 pound container to 20 oz bags.

After we put on the requisite hair nets, aprons and rubber gloves , our supervisor Don started handing out assignments.  It became readily apparent, at least to me, that I had been given the most important job. 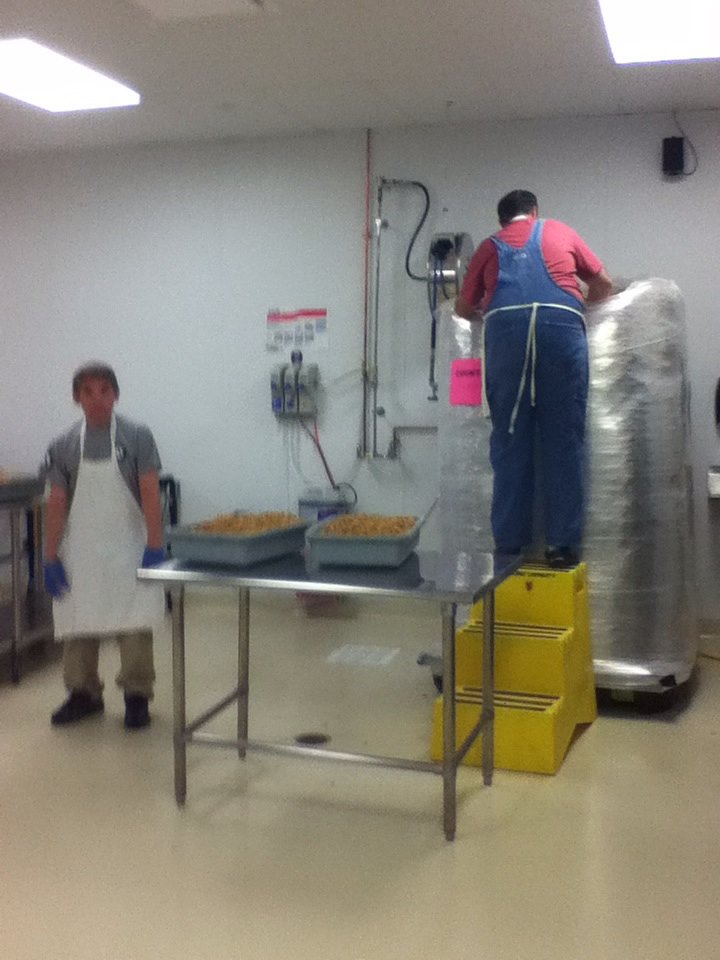 Yep, call me Scoop Roller.  It was my job to take the cereal from the big box and scoop it into those grey bins on the table.  Don chose me first for the prestigious assignment.  In the three hours that we worked I  scooped cereal from that box until, I could scoop from the second step and then from the lowest step until I finally eschewed the step stool altogether and just scooped from the floor until I had to finally kneel down to get to the level of cereal left behind from my labors.By the end of the day we had packaged enough cereal for almost 1,000 meals.  And each flake of cereal used was scooped out of it's conveyance by yours truly.

Yes, I thought I had the most important job.  That is until that young man on the left of me, took a short break.  You see his job was to take my bins brimming with flaky goodness and provide me with a new bin.  In the beginning this meant I could stay on my perch and concentrate on the task at hand.  He was also responsible to take the full bins and give them to the 2 tables of volunteers responsible for placing them in bags and weighing them to assure they reached their 20 oz. capacity.  He would take their empty bins and bring them back to me so I could refill them.

When he was there, I was able to keep up pace with the 8 baggers and sometimes run out of empty bins to fill which would allow me to cut down the plastic surrounding the box, which greatly eased my ability to scoop.  When he left, I did his job and mine for a few minutes and it quickly became evident that he was the drumbeat of the process and that without his support the whole enterprise would quickly break down. 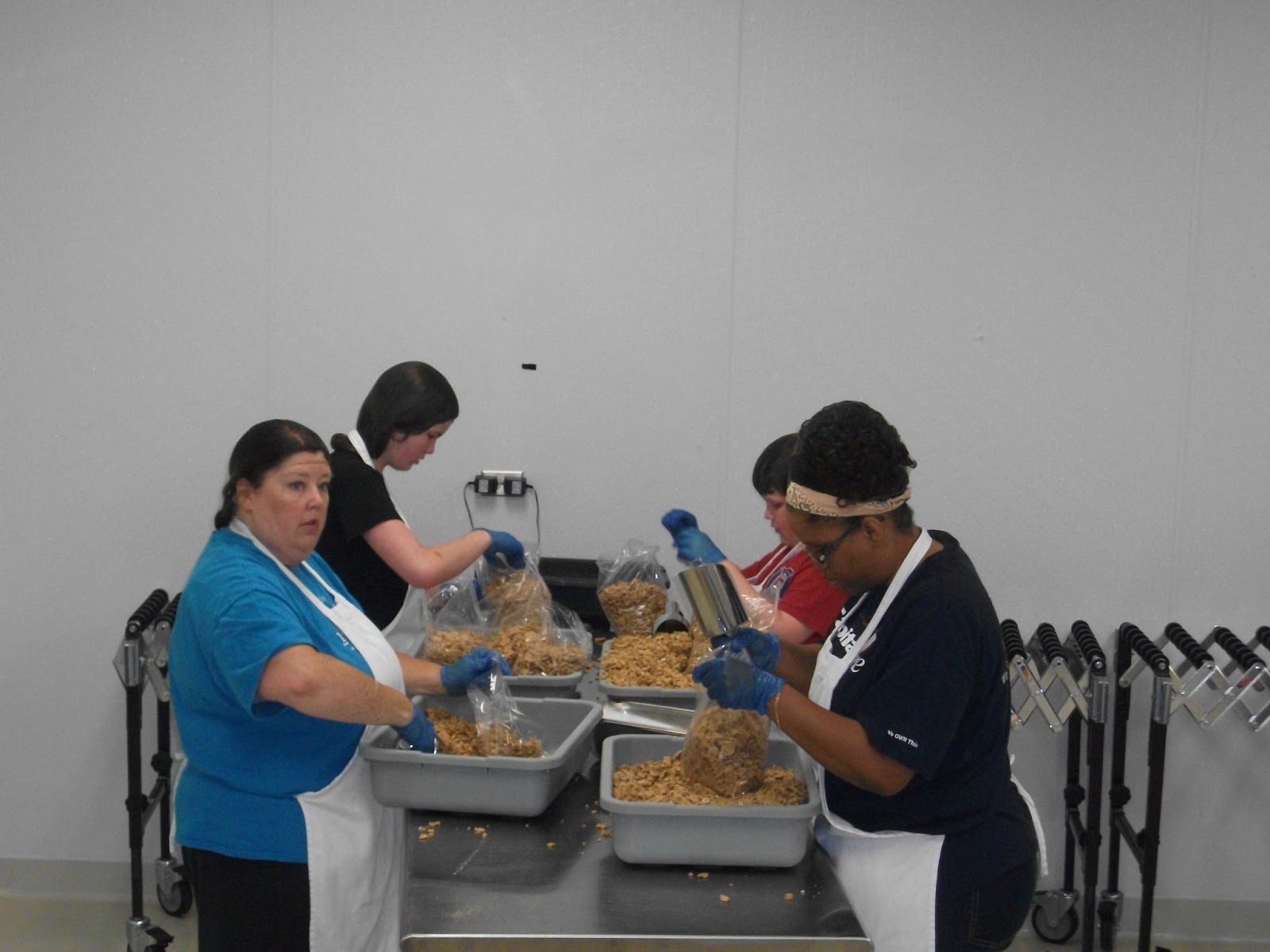 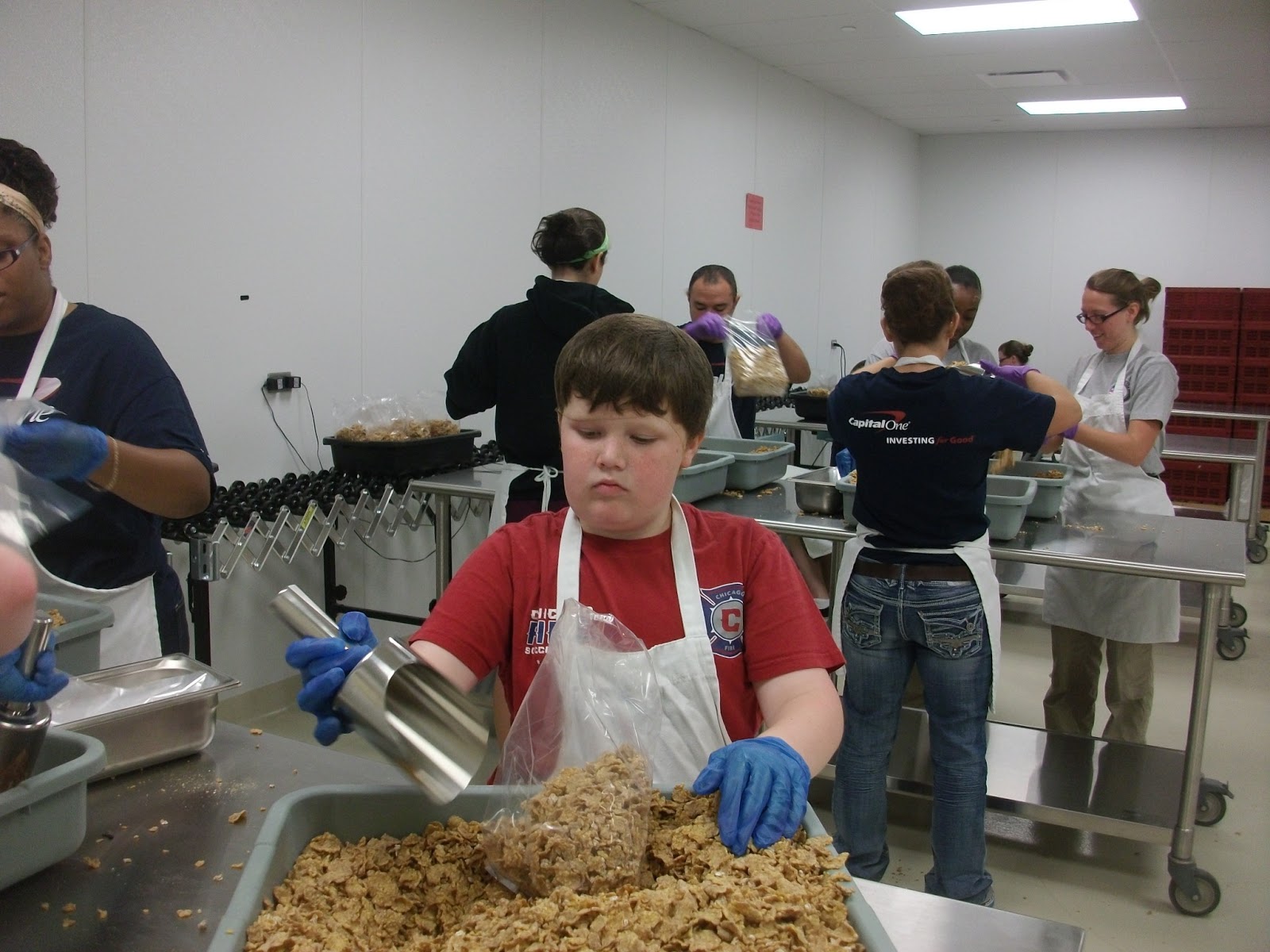 So when he came back, I told him that I thought he had the most important job, and he quickly agreed.  You see, people like to be valued.  Even if they are just volunteers, they like to be valued.  After he came back I got to thinking about it more.  I started on concentrating on what job was most important.  Was it those two tables of cereal baggers?  Three of my favorite relatives helped man those tables.  Without  them my scooping and Nathan's tempo would just leave 16 filled tubs and a box mostly full. 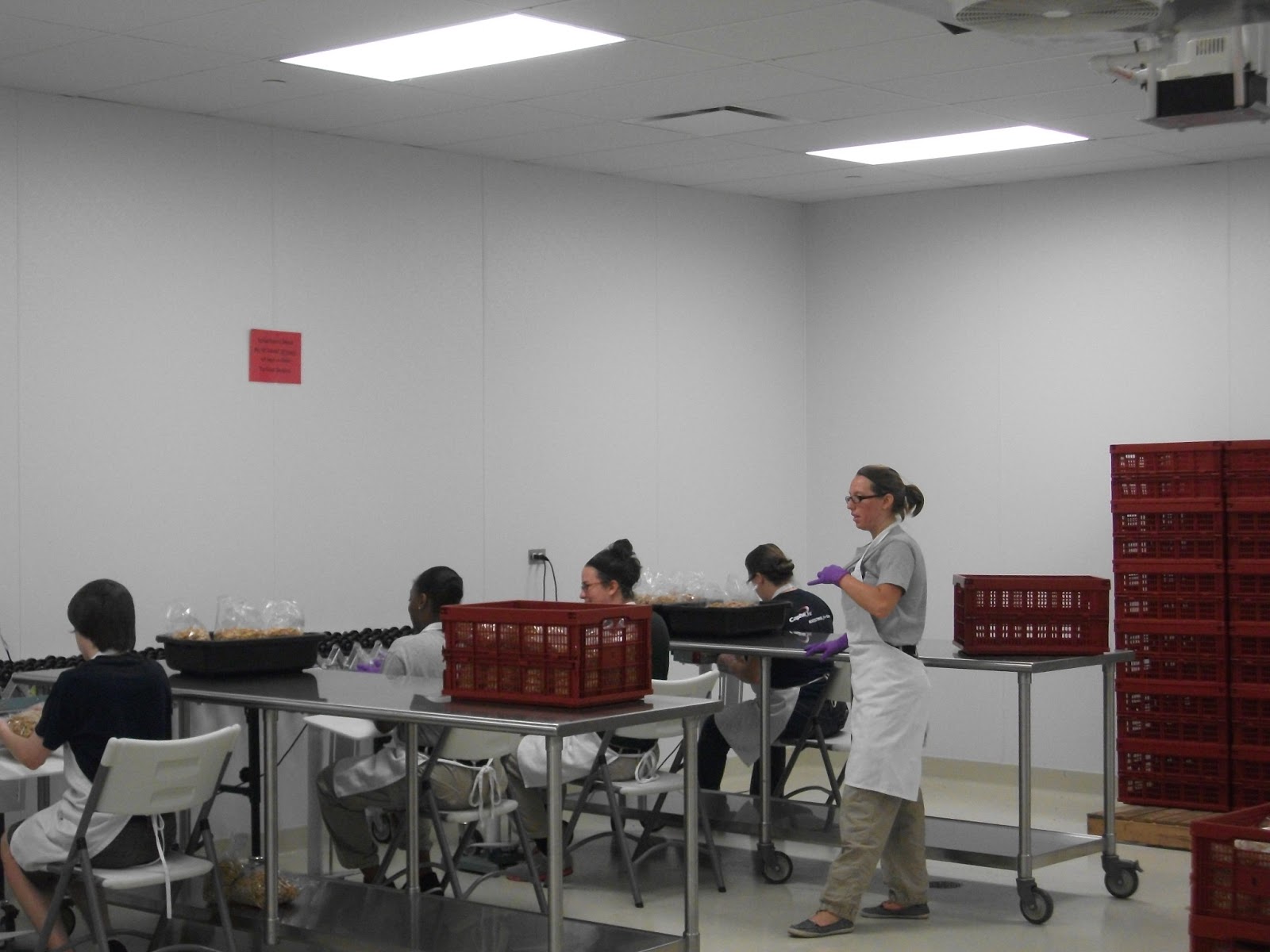 But even with those 8 bagging and weighing away, the whole operation would come to a halt with out the bag sealer.  Yes just as I scooped all the cereal into bins, the four people seated sealed every bag. the person standing took the sealed bags and prepared them to be distributed to the food pantries, soup kitchens, and summer feeding programs that the food bank supplies.  And let's not forget about Don, who went from station to station informing and encouraging each group of workers; perhaps he had the most important job.

Sometimes the most important jobs are the ones behind the scenes.  We were able to volunteer today because a friend watched our 7 year old while we were there.  We volunteered with a group of employees from Capital One.  I am not sure exactly what had to conspire for them to come.  But I imagine that compensation and covering of duties was involved.  It seems the more you break it down, the harder it becomes to determine the most important job.


So what is the most important job? To steal from City Slickers, it is one thing.  It is the one thing that you were assigned to do.  The most important task in a project is the task you were given.  That task is your chance to shine.  You have been given that task for a reason.  Do the best you can at that task and the project has a better chance at success, than if you just did it 1/2 way because you wanted to be the one to scoop cereal out of a big box.

As the new title suggests, I am no longer just a home school dad.  I am a home schooling dad transitioning back to the business world.  My most important job, to ride that horse one more time, is to land a job.  This blog will reflect on my past jobs and my current search.