I Cry A Lot

It's true. I'm a bawler. Especially when I watch t.v. or a movie, I always cry at the climactic scene. Even when the moment for tears is so painfully obvious that I have called it ten minutes before hand, and have been mocking it since. It's still tearduct city.

For example, Friday night I cried at the conclusion of Super Sleuth's Christmas, and the only part of Christmas programming lamer than that show, was Tiny Tim and he was really lame.

Yesterday we were watching about the only current t.v. show we watch as an entire family. Extreme Makeover: Home Edition. We really like watching how special families are given a special house. We really liked this week's episode about a family with 3 precious boys, 2 who have autism.

This is usually where most people would say something about the show and preface it with spoiler alert. If you are familiar with this blog, you know I am not most people. I mean I'm hardly even me. Instead I'll give you this . . .

If you have not yet watched the program, you can watch it right now, on hulu, like we did. But don't go anywhere. I have brought Hulu to You (hoo). It will take less than 2 hours and I'll wait for you.


I liked so much of it, I'm not quite sure where to start. I was really psyched at the beginning of the show to find out that Temple Grandin was going to be on. We really enjoy the biopic of her starring Clair Danes. Watching the real Grandin in action not only highlighted what autistic people can achieve, it also showed what a spot-on portrayal Danes turned in in the film.


I also liked the fact that the mom on the show blogs. Yesterday she wrote a cool post some features of the not talked about on the show.


I also loved all 3 of her children. I thought EMHE did a great job giving us glimpses of all 3 kids not just the ones w/ autism.

As wonderful as the house was, as great as the kids were, as fantastic as it was to see Temple in action the real star of the show in my mind was the organization C.J. works for, The Sparrow Clubs.

Sparrow Clubs work with schools to have them adopt families in their communities with extreme medical needs. The schools then adopt those families and raise money and awareness in the community. Almost all of my multiple crying moments of the show were Sparrow Club moments. It was especially poignant when they revealed that the families oldest child had become adopted by a Sparrow Club .


It wasn't until after the show when I was researching Sparrow Clubs that I did my most serious bawling. It was when I was reading about how the Sparrow Clubs FKA Sparrow Project was born. I double dog dare anyone to read this without crying.

Well, I have to run out to the store and get more tissue. This probably won't be the last time I talk about Sparrow Clubs. It's also not going to be the last Home Makeover recap, as next week they are going to Joplin.


Next Time: The Best of Chuck, The Worst of Chuck
Posted by Home School Dad at 10:38 AM No comments:

Links to this post
Email ThisBlogThis!Share to TwitterShare to FacebookShare to Pinterest
Labels: EMHD, Films, Hulu, In Praise of . . ., Television, Tornado Relief

Free Circus Tickets is No Trick

I am part of a group of bloggers that promotes certain family events in Chicago for a national marketing company.

One of those events is the Ringling Brothers Barnum & Bailey Circus.

There is a really good promotion happening October 31st which for some people is Halloween. Even though my family doesn't participate in Haloween, I thought I would pass this cool trick or treat give-a-way on to my readers in the Chicago area. I will also have it on my twitter feed and facebook page.

Parents who visit a Ringling Treat House with children between the ages of 2 and 12 will receive one voucher for a FREE Kid’s Ticket for each child present. Voucher is redeemable for a ticket to any Monday – Friday performance of Ringling Bros. and Barnum & Bailey presents Fully Charged at Allstate Arena and United Center. Voucher must be redeemed for Kid’s Ticket at the arena box office. Additional tickets and adjoining seats may be purchased at that time. Trick-or-Ringling Treating is available on Oct. 31 until the end of the hour noted or until 100 FREE Kids’ Vouchers are distributed at each house, whichever occurs first.
Posted by Home School Dad at 8:51 PM 1 comment:

This week I showed my face in the blogosphere after a month long absence. What better place to get back in the swing of things than participating in Six Word Saturday @ShowMYfaceDOTcom?

They (Still) Drive Me Crazy Sometimes
About a month into my blog, I started sharing poems I wrote here. The first time out I was all ready to put out a poem I had written 10 years prior. I decided at the last minute to write an new one instead. Here is what happened . .

I, like many people, am a closet poet. That is where my poems remain, in a drawer, next to the closet. From time to time I am going to pull one out of that drawer and share it here. This time to show I am not merely a former poet, I will present one I wrote only hours ago.

They Drive me Crazy Sometimes
She drives me crazy sometimes
Who can win an argument with an amnesiac?
But, no one gets me like she does
She makes our house a haven
And, only laughs when my jokes are funny.

She drives me crazy sometimes
Who made her the third parent, anyways?
But, beneath that bossy boiler
Lies an artist's soul
Skipping and humming. Playful and loving.

He drives me crazy sometimes.
Who can have that many questions about Star Wars?!?
But, he is as adventurous as a pirate.
As giving as Robin Hood.
And as resourceful as Macgyver.

She drives me crazy sometimes
Who wants to be a puppy every single day?
But, she makes cuteness an art form
She's a three year old thesaurus
And she loves to ask God to help people.

They drive me crazy sometimes
But, isn't it worth the trip?


Meanwhile back in 2011. The family still drives me crazy on a somewhat frequentamente basis. Puppy has branched off and is now imagining herself as other animals. Today she was part wolf part tiger. In almost 2 years time they still have the same strengths and weaknesses. Being part and parcel of their family is still worth any craziness endured.

In the past 2 years more of my poetry has surfaced. You can check them all out by clicking here.


Next Time: Don't Know Much About History - A Review
Posted by Home School Dad at 12:31 AM 4 comments:

Links to this post
Email ThisBlogThis!Share to TwitterShare to FacebookShare to Pinterest
Labels: A Poem, HSD Rewind, Puppyisms, Sitting in a Tree, Six Word Saturday

Fragments From a Waiting Room

Spider Droid has an appointment so Puppy and I are waiting. Since I have a few minutes I thought I'd participate in Friday Fragments at Half Past Kissing Time. 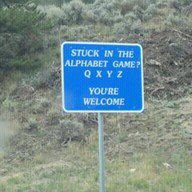 I stole this picture from Facebook. My wife and I love the alphabet game. We play it all the time, and have talked about how such a sign would come in very handy. Technically this sign is inefficient. Instead of a Y they should have put a J. There is already a Y in You're Welcome.


I have spent the past few days tweaking the look of this blog. The biggest change is one I made about a month ago when I added a slide show. I figures since I would not be posting much for a while that at least people could get a glimpse of us if they visited. I might make a few more changes in the weeks to come.


One of my new look items is a return to having a quote on my masthead. To see some of the quotes that were there previously just click on my quotable quotes page. Today's quote I heard on K-Love while en route to said appointment. You can hear the quote by watching the devotional below.

I am collecting state quarters again for the sole purpose of giving them away on my blog. My last State Quarter Give-A-Way was a pretty big deal, and I want to do it again. I have been bringing home a role of quarters each week and am now up to 43 state quarters. When I hit 50, Crazy Dave will make a long overdue appearance.

Well That's all the waiting I have to do today. You won't have to wait long for another post because I have my Six Word Saturday all ready to go. For more Friday Fragments click here.

I don't blog for a month. Now twice in a day? I am not trying to make up for lost time. It's just when I started reading some blogs I realized we are right in the midst of one of my favorite times of year, HSBA Season. This is the 7th annual Home School Blog Awards at the Home School Post. I became aware of the awards 2 years ago when I found out I was nominated for Best Home School Dad award. Last year I was nominated in that category as well as funniest homeschool blog. (I know funny, I'm a clown fish). While I have not won an award yet, I enjoy finding out about other great homeschooling resources and being part of awarding excellence.

Because of my sabbatical I missed most of the nomination period. They end this Friday October 21st. You can nominate posts by clicking here. So if there are any good home school blogs you want to share with the home school community go ahead and nominate them.

Next Time: Don't Know Much About History- A Review
Posted by Home School Dad at 10:47 AM 3 comments:

It's been over a month since I posted here. In addition to my homeschooling, I had been working a 40 hour a week temp job. Alas the assignment ended early and my financial loss is your entertainment gain. Hopefully such a lag in posting won't kill this blog altogether. I am gratified that my last post during my self imposed exile from the blogosphere was one of my 10 most popular posts of all time.

I have had many great post ideas during my sabbatical and will be getting to those in the next few weeks. For now I am just going to try to get back into the swing of things. I haven't even read anyone elses blogs in the last 2 weeks and am looking forward to seeing what you have been up to.

I am writing this while the kids are watching an educational video, so I need to get back to them pretty soon.

Next Time: Whatever Strikes My Fancy.
Posted by Home School Dad at 10:01 AM 1 comment: