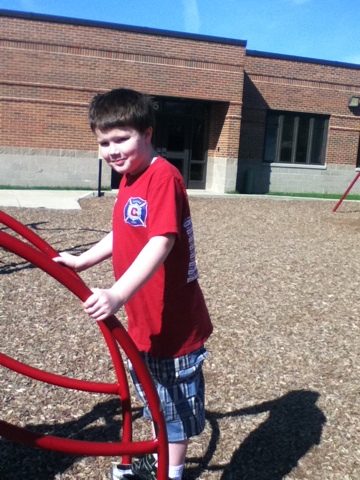 So Spider Droid magically forgot his multiplication facts over the summer ( we focused on writing.) So we went to the internet and printed out a blank multiplication chart and had him fill it out. It took him 22 minutes, just copying from flash cards. We then studied the flash cards, realizing we could skip the zeros, ones, twos, tens, and elevens. The next night we took out a deck of cards and had him multiply any two numbers that came out. This also helped Puppy, as I had her add the same set of numbers (she's in first grade.) It turned into a race. They had fun! The next night I googled free math games (for example) and Spider Droid played a few fun games. We alternated flash cards, playing cards, and computer games. Tonight, it's School House Rock, Multiplication Rock. Love it! We're having fun! I'll let you know how quickly he fills in his next chart! Making learning fun works for us. For more WFMW go to www.wearethatfamily.com.
Posted by Just Plain Dave FKA Home School Dad at 8:02 PM

Hi,
Will you please post a link to your Blog at The Homeschooling Community? Our members will appreciate it.
Members include: Homeschooling parents, families, experts, advocates and organizations.
It's easy to do, just cut and paste the link and it automatically links back to your website. You can also add Articles, Photos, Videos and Classifieds if you like.
Email me if you need any help or would like me to do it for you.
Please feel free to share as often and as much as you like.
The Homeschooling Community: http://www.vorts.com/homeschooling/
I hope you consider sharing with us.
Thank you,
James Kaufman, Editor