I have read some exceptional books during my summer reading program thus far.    I will say this; many of the books I've enjoyed most this summer have been great from the first chapter, sometimes the first page and even the first sentence.  I am only about 10 pages into a new book and I am convinced it will be a wonderful experience.  The book is Emily of New Moon by Lucy Maud Montgomery.  Let me tell you why after only 10 pages I think it will be very good.

The first few reasons I had even before I started reading. One is I am familiar with the author's work.  I just finished listening to Anne of Green Gables, which I enjoyed immensely.  I have seen many t.v. and film versions of the Anne books and saw the musical version in Prince Edward Island a few years back.

This leads me to another reason I think I will enjoy Emily of New Moon because I've been to Prince Edward Island where the story takes place.  I found that I have enjoyed the works of LM Montgomery more since my trip to PEI because it is easier for me to picture life on this island because of my experiences there.

The third reason I thought I'd enjoy this book before I read it, is the reason I ordered the book from my library in the first place. I had read that Lucy Maud Montgomery had based Emily on her own experiences of growing up in Prince Edward Island.  I like fictional books based on authors' actual experiences. 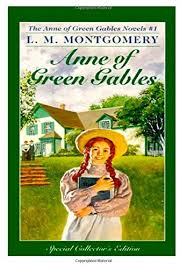 I like how the cover of New Moon is evocative of Green Gables but seems to be setting a different tone for the book. 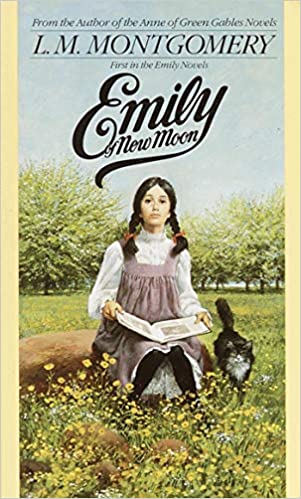 The first few pages of this book also have given me reasons to think I have happened upon a real masterpiece.  The first sentence drew me in and I related to it immediately. The chapter is entitled the House in the Hollow and begins  ...

The house in the hollow was "a mile from anywhere"- so Maywood people said.

I really liked  this turn of  phrase; a mile from anywhere. It reminded me of how I used to say that I have lived in several Chicago suburbs that few had ever heard of but they were familiar with our neighbors.  I grew up in Elk Grove Village, and people were more familiar with Des Plaines, Arlington Heights and Schaumburg.  After I married Amy we lived in an apartment in Hickory Hills where I regularly had to tell people we were next to Oak Lawn and Bridgeview.  Our first house was in Carpentersville where Algonquin, East and West Dundee, and Elgin are better known outside of the area.  Now that we have moved to Elgin, I no longer need to give sister cities. So, from the first sentence I connected my experience to that of the novel.

I am a big fan of symmetry and also enjoy foreshadowing when it isn't obtrusive. In the 4th paragraph of the book Montgomery starts one and nails the other quite elegantly: "She remembered that walk very vividly all her life ... - more likely because of what happened after she came back from it." The symmetry comes into completion with a big reveal that's blurted out quite unexpectedly in the final sentence of the chapter.

One of the things I liked instantly about the titular character of Anne of Green Gables is how she names things. For example calling people who understand her fully, kindred spirits, and changing the names of place names to better place names (ex. the Lake of Shining Waters). Emily does the same thing immediately with something called "the flash." I also like the pacing of the story, "the flash" is alluded to 3 times in the first page and not explained until page 7 but feels just right when it is explained.  In my own writing, I often struggle with the desire to "explain" things too quickly.

Another enjoyable aspect of the first ten pages (about a chapter and a third) is that the second chapter takes place immediately after the first ends.  In fact chapter one stops with the reveal I mentioned, and chapter 2 begins in the same conversation. That may seem like an abrupt break chronologically, but ending the chapter on the reveal is an excellent choice.

I love quotations. I even have a space on the header of this blog for quotations I really enjoy.  If you are reading this on the computer version of this blog, you can look up and see the following quote (although you don't have to, as it follows the elipses) ... Aunt Nancy had once said to her 'The first time your husband calls you "Mother" the romance of life is over'.

I love this quote for multiple reasons: a) it's an excellent quote.  b) the quote itself is the narrator quoting Emily's father quoting Emily's mother attributing the quote to Emily's Aunt Nancy.  And as clumsily as I described, the quote is as breezily as Montgomery put it. c) the quote is a story of how Emily's father wanted to name her Juliet after Emily's mother.  The fact that he heeded his wife's advice, and they named her Emily, made me think that the romance between them was never over.  d) I related the naming story to my own experience. Before I got married, I had always wanted to name a son David, as this is not only my name but my Father's as well.  Amy, who knew me when I would stay at my parent's house between school years and other situations, saw firsthand what it was like with two Davids in one house and that name was off the table before we even married.

I know I have mentioned twice already how I connected with the text on a personal level in the first ten pages of the book.  Some might say that's more about me than the author, but I say that good writing is written in a way that the reader can make connections to it.  Making connections to it early helped me feel great about the prospect of reading the rest.

The last thing I want to share about the way this book begins is another example of the delicious way Montgomery turns a phrase. Emily's dad is telling Emily about her mom and utters one of the best sentences I have ever read:

When she fell in love with me, a poor young journalist, with nothing in the world but his pen and his ambition, there was a family earthquake.

I mean that's more of a sentence I expect to hear from John Boy Walton. the boy poet of Virginia!

I can't believe how amazing this book has started! What I really can't believe is that I stopped reading it long enough to write this post.  If you'll excuse me, I'll go remedy that situation.