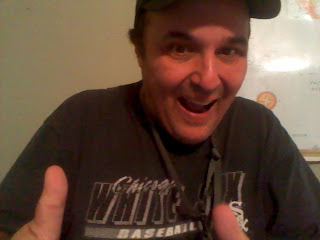 It's Six word Saturday over at Showmyface.com. I am heading to go see the Chicago White Sox play the Detroit Tigers a little later today. My Six words will be White Sox related. Ordinarily it would be something simple like: Don't lose 5 in a row! Nice, simple to the point. But today I could care a little less whether the slumping Sox win or not than I usually do. Today's festivities off the field are more important to me than the game on the field.

Today is Nancy Faust Day at the game. Nancy is the long time organist for the White Sox. When I say long time, I ain't Whistling Dixie. She started in 1970. She is retiring this season. Faust is a White Sox legend famous for playing little musical interludes introducing batters and between innings. Her most famous and most often invention is where I get my Six Words today. In 1977 Nancy took an old song by the band Steam called "Na Na Hey Hey Kiss Him Goodbye" and played it each time the opposing pitcher was removed during an inning. This became especially effective with the entire contingent of Sox fans present bellowing the chorus at the top of their collective lungs.

For this and many reasons Nancy is an iconic figure for the White Sox. After the 2005 season she was given a World Series Ring. Today they are giving the first 10000 fans Nancy Faust Bobble Heads. I may not be one of those, but I am glad Amy and I will be there to celebrate 41 seasons in Faust place.
For more Six Word Saturday click here

Next Time: A Typical Give-a-way