Six Simple rules on How to get 50 or more comments on your post about home education.

Sandy Laurence recently did something I have not been able to do in over 2 years of blogging. On February 28th She posted this piece about what she thought were some disadvantages on home education @ Type-A-Parent. Within a fortnight she had received over 100 comments on her article.

What Ms. Laurence achieved that I have not, was to generate more than 100 comments on one post. The most comments I ever received was 40, when I was giving away 50 state quarters. That's not even a comment a quarter!

I don't want to just pound away on Ms. Laurence's piece as she is not the only blogger in the past couple of years to surpass my high water comment mark by posting about homeschooling. Sylvia Biu wrote a piece a couple of years ago called Homeschooling is a Bad Idea. To date she has received almost 60 comments about it.

So based on these and other posts about Home Education, I present:

How to get 50 or more comments on a post about Home Education.

1. Write a post about Home Education.
2. Come out against it (or at least be leery of it).

Both pieces question the effectiveness of homeschooling in their title and their first few lines. Both topped the 50 comment mark. Phillip Faustin started out well in that regard in his 2007 piece, entitled "Homeschool is Dangerous." Except Phillip really came to the defense of Home Education. The result: 0 (Count them) comments. I am not saying that all good pro home schooling pieces will garner no comments. But it has been my experience that these negative pieces get much more attention.

Sylvia Biu says this in her second paragraph:


Homeschooling was originally thought to be a good idea, but recently it has become the subject of late-night comics. Now, it is mostly frowned upon for all but severely disabled children or those otherwise unable to attend school for whatever reason.

WOW. That's like saying that democracy used to be a good idea but isn't any more because it has become the subject of late-night comics. Then the second "fact" follows one of my favorite rules for passing on information. Say it: don't back it up. Mostly frowned upon by who? Don't know. Doesn't matter. Sylvia Biu said it, that settled it. Not likely.

4. (Very similar to #3) Start with facts and sprinkle-in falsehoods.

Here is a prime example from Ms. Laurence's concluding paragraph . . .

That starts out like a solid fact. The vast majority of American children attend public or private school. Throwing in successfully, throws the fact under a bus. I guess it depends on what you mean by successfully. If you mean anything other than they get there and back, it's not successful. Consider these quotes from the Time Magazine review or "Waiting For Superman." . .

Americans also can't afford the fantasy that we have the world's best educational system. The U.S. is near the bottom of advanced countries in math and reading scores. We may not pass sleepless nights worrying about Finland, but that country's kids get a world-class public-school education, and ours don't.

And this about film producer Davis Guggenheim . . .

What he found in his two years of researching Waiting for "Superman" (with co-producer Lesley Chilcott) was that a lot of schools aren't right for any kids.
That hardly seems like a definition of successful. But point out this or any other inconsistencies in her piece to Ms. Laurence and you get . . .

5. Defend your right to have opinions. (Even when people are questioning your facts.)

In more than one of her comments and in a subsequent post trying to clean up her previous mess, Laurence said something like this:


.. .this IS a blog. These aren’t research papers. Each article I’ve written has contained my opinions.

She was right about one thing, this is a blog. However her post contained facts, or at the very least opinions written so they looked like facts. For instance What she said about the vast majority of American children did not seem like an opinion, it seemed like she meant it as a fact. Blogs might not be the place for facts, but if you are going to use facts, use them properly. I will save any more of my opinions about opinions for an opinion piece I will be placing here soon.


First, unless a parent is himself a previous honor student or a genius who mastered more than just the three R’s, a child may not receive quality home education. Even if a parent earned a degree in one or more areas, it may not suffice and could limit the scope of a child’s knowledge, unless a parent excelled in other major subjects or supplements with tutors in areas in which he may be weak.

Sure it's an opinion. She says may not and could limit. But come on, really! How many public or private schools only employ teachers that are honor students or geniuses? How many of those teachers have earned a degree in more than one area? This is just an example of setting the bar higher for home educators than other educators without any reason. Her opinions were so off base that many commented just to tag her out. (Baseball reference, couldn't resist.)

So, if you want a homeschool post with more than 50 comments follow some of these simple rules and you should be just fine. Here is a bonus tip if you want to make the century mark.

Bonus Rule: Be abusive to your commenters.


Sandy Laurence had a few choice words for her commenters. Like this . . .

Well, at least I’m getting reader participation. I expected people to disagree with some of what I said, but I figured the good homeschoolers would be better at reading comprehension.

Or if that wasn't direct enough she later said this . . .

Did you really read what I said? Are you offended because you’re one of the homeschoolers I described in my post? If you’re not one of them and, instead, are doing a good job with it, I’m not talking about you. Get over yourself. And brush up on reading comprehension.

Thanks for your well-thought-out comments.

In her follow up post she tried to explain her rudeness by saying that it was because her piece was edited and she didn't realized it was edited. So she thought people were misreading her. I understand what it means to be edited for newspapers and other blogs. The first thing I do is read my piece as it appears in publication. She could have done that ,and as I tell my kids, you don't have to say (in her case type) every thought in your head.

That's all I have at the moment. If you want, you could prove me wrong by helping me get 50+ comments on this post. I think (and hope) it only follows the first rule. Feel free to pass it on to friends and neighbors because, when all is said I done, I just want more comments. Please! 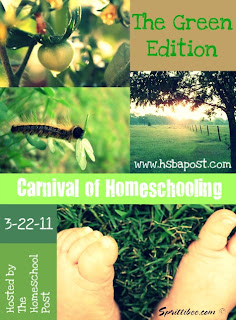 Sorry, I got a little carried away there. But that doesn't mean I don't want you to comment :)

For those joining from HSBA Post click here or on the graphic tto head back to the Green Edition of the Carnival of Homeschooling.
Posted by Just Plain Dave FKA Home School Dad at 7:00 AM

Hey Dave, I hope you get your comments. This is an interesting article.

Oh this is fun. My longest amount of comments was 6 or so, and that was the post on how to get a shower and homeschool. My biggest readership was when I linked to HOmespun Juggling with the title "Are Homeschoolers Rich?"

Questions and provocative titles get attention - but I've never hit 50.

Amusing post! It is lonely out here in the homeschool blogosphere. I always feel like I am not part of the "in crowd." My words remain comment-less with exception of spammers who seem to find my blog regularly. A wish: May more comments come your way.

This was a very entertaining post. I'm afraid I can't offer anything constructive, but you're only looking for increased comment count, anyway. ;)

Well, since you begged for comments ;) hehe

Misinformation and prejudice bothers me so much that I really cannot post much on hot topics anymore... I regret it, THEY regret it.. It is just better all around if I just don't :) Besides, I don't care what they think anyhow. I don't think very highly of lots of people, but I like to assume they are doing their best. And since I like my own freedoms, I like to leave them to theirs...

Are you using CAPTCHAs on your comment section? I found that implementing CAPTCHAs has eliminated comment spam from my blog.

I think this is a good intro to CAPTCHAs

My husband became a public school teacher 3 years ago (special ed). We home educate our own children. He is even more convinced that he does not want his children in school. Education is far more than memorizing for a test and then forgetting what you learned. It is far more than a school doing well on the yearly achievement tests. Most teachers just teach to that yearly test. Not much real education goes on in schools.

lol! I read that post - and (most of) the comments. I'd say you reported it accurately. On my blog, besides the giveaways, I think my post on "Why Homeschooling Mothers Are Superior" (a response to Tiger Mom) got the most comments, but nowhere the 100 mark!
Best,
Linda
P.S. Yay, I'm #8!!

The vast majority of home school dads never convince me to comment.

Great post. I was one of the commenters on Ms Laurence's post, but I didn't garner a snarky comment back. I was too late to the party and I think she'd already given it up and gone to bed.

GREAT POST! I had two thoughts as I read this.
1.The Tiger Mom ...is she that outrageous or was she just out to sell her book.

2. Yes, I think even though she may have exaggerated a bit, I think she is that outrageous.

Thanks for the laugh and good luck. I will be back,

Great post. I too get very irritated with misrepresented facts when it comes to homeschooling :)