Write a song for someone

A few weeks ago I posted a song here about Allen Levi, one of my favorite musicians/bloggers/people. I e-mailed him the link and received this response:

i'm honored by your creative gift. i've written lots of songs but not been written ABOUT in any before (that i can recall anyway). ... i posted two new blogs this week. i still have to make myself do it, but the writing is a good discipline for me. ... Hope y'all are good. You're a good man. every blessing, allen

I thought it was really cool that I could impress such a prolific song write like Allen just by writing a song about him. I also found it strange that no one had ever written a song about him before. So, my challenge for any of you would be song writers out there. Write a song for someone, it might be the only one they ever get.

I was working on some phonics work with Spider Droid and we were coding some words together. I wrote a few words down on a dry erase board and asked what he would do with them. His reply: draw a black hole near them and it would suck them all away.

It was funny and poignant thing to say because reading may not be his thing, but he sure has his science down.

A few weeks ago one of my former pastors who is now pastoring a Church near San Diego, CA had a massive heart attack. It is a miracle that he survived. His heart stopped around 30 times when they were putting a stent in. Each time they had to stop the surgery and start his heart again. After the surgery, he was in a coma like state for almost a week. All of a sudden, He was out of the coma like state and just days later he was at home with his family.

On Sunday my sister told me that a former pastor of ours had died that morning. He was substantially older than the first pastor I mentioned but still younger than all the kids grandparents. I will be at the wake at the same time that many of you checking in from Friday Fragments will be reading this.

Please pray for the families of these two men of God as they deal with the the two different outcomes to illness: recovery and death. 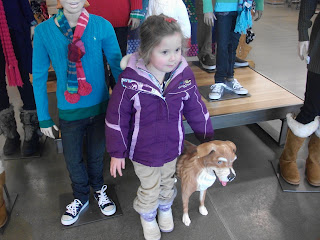 I was at Old Navy a few months ago and would you believe: They have a mannequin that looks exactly like Princess Puppy? That's just weird!

For more fragments head over to Half Past Kissing Time.