I have worked 2 jobs in the past 10 years where at least part of my job was being aware of fraud and fraudulent behavior. So when I received an e-mail today from UPS that said my package was coming and just to open an attachment to get the tracking #, I should have known better.

But for whatever reason I opened the attachment because from time to time I do have packages sent to me for products I am reviewing or free trials I see advertised. However, I should have noticed I was not addressed by name, nor was there any indication of my real address or anything like that.

Bottom Line: this was a malware scheme. The moment I opened the e-mail attachment my security system zapped it from here to Feliz Navidad. However, things could have been a lot worse. If you ever get an e-mail asking you to do anything even just open an attachment don't do it. The best thing to do before even opening a suspicious e-mail is google the subject. If I would have simply googled United Parcel Service Notification E-mail, I would have soon found out it was a scam and not even have to trust my security program to protect me.

Fragment 2: What do you get the Dad/Grandpa who has and/or gives away everything?

My Dad is a hard person to buy for. I have talked in these pages before about how his goal in life is to de-clutter by giving all his junk to his kids. On Monday I realized my Dad was coming over to fix things at my house the next day and the day after that was His birthday. I decided that the best thing to dp was throw him an impromptu surprise party. Bunny made a cake (Puppy and Spider Droid helped.) My Dad showed up slighltly after the cake came out of the oven so we moved it to the desk in my room where Bunny frosted it once it had cooled. I would go in there from time to time to check on Bunnies "Math".

On Tuesday night I saw that the first 100 primes were still written on a dry erase board from our history unit on Pythagoras. This gave me an idea. I rewrote the primes and stopped at 73 which is how old my Dad was. I then draped my Sox Throw (No it is not a 1919 reference) over the dry erase board.

After the cake was frosted. I took my Dad out to the shed to ask him some question. This of course was a ruse so Spider Droid could remove the throw revealing this . . . 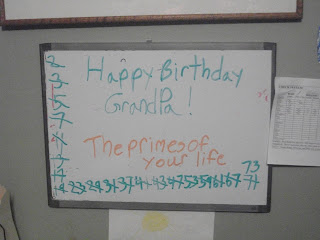 Bunny and Puppy brought out the cake and we had a celebration.

Today, Puppy went in her room and saw a rainbow on her wall. 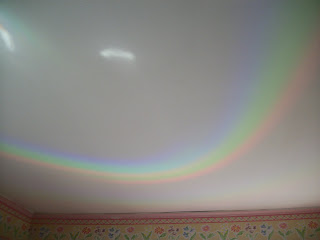 The sun was shining through the Window reflected on a c.d. on a bookshelf and the rainbow was visible on the ceiling.

On Tuesday, I was helping Spider Droid make a power point presentation. I kind of went stir crazy and made this video . . .

Well that's all the fragments for today. click here to head back to Half Past Kissing Time.