When I walk by Jim McMahon

Yes you guessed it. It's Six word Saturday time at Show my face dot com and I just played my six.

Here's a bit of an explanation. Actually there are 2 explanations. If this was a t.v. show the first explanation would start with these words imposed on the screen:


The Chicago Bears won Super Bowl XX. There were many leaders on the team one of which was their punky QB Jim McMahon. Now that Walter Payton is no longer alive, McMahon is the living embodiment of that team (at least on the offensive side of the field).

This leads us to our second explanation. Again if this was a t.v. show and you hadn't already switched the channel you would see these words on your screen:


Our family was given free tickets to go see an Arena Football game about 15 minutes from our house. The name of the team is the Chicago Slaughter and they are coached by another Superbowl winning former Bear, Steve McMicheal. It was the opening game of the season and there was a carnival like atmosphere at the stadium. If you have ever been to a minor league baseball game, it was much like that. There were bouncy rides and other games for the kids and even a face painting station. 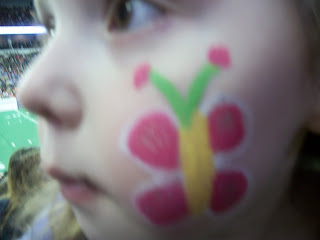 As the second Half was just beginning I was coming back from the aforementioned face painting station when I walked right past Jim McMahon. This was not so unusual as it was Jim McMahon night. He was posing for a picture and it would have been so easy to snap his picture right there 10 feet away from him. Very easy as I almost always have at least 1 camera around my neck when I'm in public. I am a blogger, after all.


No, I had left both cameras I had brought to the event in the stands so my family members could take pictures like this ... 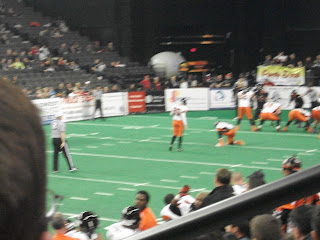 But in reality they were taking pictures like this . . . 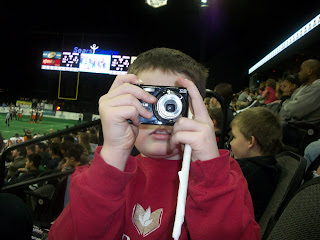 So I rushed back to the stands to get a camera but by then it was too late. McMahon had gone back to his suite and even though I did snap two pics of him there. 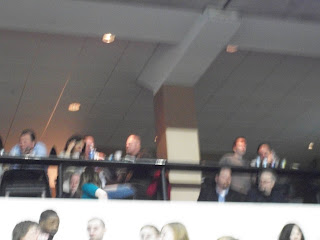 The best you could say about these pics was the guy sort of looked like he could possibly maybe look a little like Jim McMahon. But the thing is:

The evening was still a whole bunch of fun. It's not every day you can shout Slaughter the Beef. (The slaughter lost to the Omaha Beef.) I will leave you with some video of the evening.