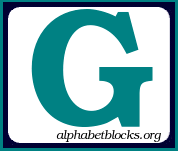 Wait one minute, you might be thinking.  In yesterday's post you basically promised that G would be for Give-A-Way.  You indicated that you would be giving away some state quarters.

That's true, I really did.  Then I realized that today (April 7th) is the 3 year anniversary of my brother Keith's death.  I just didn't feel like putting my Crazy Uncle Dave hat on over my mourning brother one.  So, the quarter give-a-way will be soon.  You won't have to wait all the way to Q, I promise.

I thought that it might be good to give a working definition of grief.  Since I decided to check in at Show My Face for Six Word Saturday. Here are my 6 words:

*Bereavement is generally associated  with the loss of a loved one by death.

Pushing 50 as I am, I am not a total stranger to death.  Most of that death has come as a result of old age.  My grandparents all died between the ages of 79 and 97.  Keith was 7 months from 39 when he passed away.  Sometimes, even now, I can't wrap my head around him being gone.

I do still have deep stress about his passing.  This stress is not daily, nor weekly, or even monthly.  It will sometimes hit me at random times but generally hits at 3 times during the year: On or near his birthday, the anniversary of his death, and Christmastime.  Teaching school, blogging or just about anything becomes difficult to focus on and I become quite a bit more irritable.

A few months after Keith died I won a book from the Library Thing Early Reviewers Program about bereavement.  I still haven't read it fully or reviewed it.  I guess it's hard for me to imagine reviewing a book for early reviewers 3 years after it came out.  The book's title "In the Grip of Bereavement"  accurately describes my episodes of grief.  I really do feel like grief has a hold on me during these times.

Keith has now been dead longer than he was sick.  Our sister who is 3.5 years his junior is now the same age he was when he died. Life has gone on without him.  His children were 8 and 5 when he died that means they are 11 and 8 now.  In just 2 years his daughter will have lived longer without a father than with one.

My faith in God has been a great sustainer over the past 3 years.  Even so,  sometimes the grief is so strong it is all I seem to be able to feel.  Sometimes I am even frightened that someday I may not grieve at all.  These thoughts and feelings are not the entirety of who I am.  but like today's post, which is neither well crafted nor polished, they are incredibly real.

To see other G posts in Blogging A to Z click here.

This is a very touching post. Grief is a difficult thing to endure. Thank you for sharing.

Very nice post Dave. I lost my mother in January and the pain is horrible. Sorry for your loss so young.

A beautiful post in tribute to the brother you love and miss... raw and real, just as grief is. It is also a process, and though they say time heals things, I haven't found that to always be true as I near 60, it never does close up that hole in the heart for one who is missing. My comfort is in knowing and believing that those who have passed over are nearer to me than a whisper, and that we will meet up again in spirit form when I leave this world to join them. I honestly can't wait! What rejoicing when you finally rejoin your brother! I am sorry that he left this world so very young. It will never seem right, life is surely not fair. I loved this post for it's unpolished honesty, and your willingness to share your grief with us.

It's so hard to lose someone close. Peace. I'm trying to visit all the A-Z Challenge Blogs this month.

Hi, I know how difficult it is to deal with the loss of loved ones. All my four brothers, and my only sister have gone on to be with the Lord, along with my husband of 44 years a couple of years ago. We go on alone because there is no other choice. Time blunts the pain, and God eases the loneliness. God bless you, my friend. Best regards to you and your family. Ruby

I'm so sorry to hear about your brother. It's so hard to lose a loved one. I can relate to this in a very fresh way right now, for I just lost my best friend. Grief, indeed. But life moves on, and they will forever be in our memories. :)

You've written about some powerful feelings here. It's always hard to know what to say to someone grieving. I think the best I can come up with is I'm sorry and I understand.

I don't think grief ever leaves us completely. Those who we love always leave missing pieces in our heart when they pass. Like an unfinished puzzle, we can still see and appreciate the big picture without those pieces, but we know we are incomplete because they are missing from our life.

Thank you for sharing this intimate and personal story, as it truly moved me. I am so sorry for your loss. I hope his children carry amazing memories which will stay with them forever.