This week at school, the older kids are working on letters and pictures to send to President Obama. One of the questions Charlie asked him was what his favorite ocean animal was. Charlie told him that his favorite ocean animal is the shark and drew him two pictures of sharks replete with pirate ships ramming British vessels. My 3-year old, Lucy said that she wanted to draw President Obama a shark. I thought it was pretty good. Here is Lucy's shark: 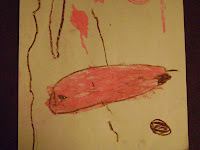 Interesting. I agree with you totally. Furthermore I have another point to add. I think its essential that children today have a friendly and good swim instructor to guide them along. So that they will take to the hobby with delight, rather than find it a useless skill. But then again, most kids always love swimming afterall.

Ahhh how I love swimming so much. Don't you just find it so relaxing. Everyone should learn how to swim. If not you might want to consider taking swimming classes.