They May Want to Consider a Name Change 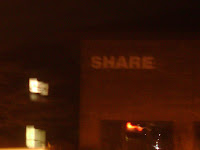 My brother is getting out of the hospital today. I could dedicate an entire blog to his medical exploits. For today's purposes lets just say that after a couple week stay in the hospital, he is going home to his family.

I have been visiting Keith about every other day while he was in the Hospital. Monday evening must be a huge hospital visiting night, because there were no parking spaces available in the entire lot. I decided to park in one of the other building lots nearby. The parking lot of the building next to Keith's was about half full, and the building had an inviting name for my intended purpose as shown above.

It wasn't until I tried to park that I saw this sign: 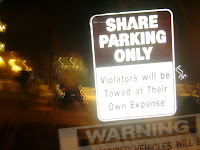 Now many signs like this, have a fine print that gives you hours that you can park without recourse. But not so here, just the old Violators will be towed at their own expense warning.

I finally found a place to park and went on to visit Keith. It then struck me that I was just told not to park in a half full parking lot at 8:00 p.m in twenty degree temperatures. To make matters worse the name of the building I could not park at is called The Share Building.

Now, there are a lot of points that could be made from my paradoxical tale of parking. What first comes to my mind is a lesson I began learning almost 26 years ago.

It was the summer of '83. I was a recent high school graduate. I had been asked to lead my first Campus Life meeting. I had decided to give a small talk based on Paul Little's book "How to give away your faith". I was working at Burger King at the time and was using my break to prepare my talk.

A coworker came up to me. I hardly acknowledged her, instead burying myself in my work. She was not be deterred however, and kept asking questions about what I was doing. I rather begrudgingly explained to her what I was doing. She then pointed out with a rather snide comment that I was acting like a building named Share and not allowing anyone to use my parking spaces.

She was absolutely right. I was like a beggar who had recently found an endless supply of food. Instead of telling every other beggar about the source of the food, I was hoarding the food for myself and those who would get the food from me on my terms. I hope she found that soul food she was craving for. To my shame, she never got it from me.

Next Time: Goodbye to NABLOPOMO.
Posted by Just Plain Dave FKA Home School Dad at 7:49 AM

Email ThisBlogThis!Share to TwitterShare to FacebookShare to Pinterest
Labels: Keith for 300, Pictures

cheesy goodness is headed your way! http://carmasez.blogspot.com/2009/02/and-winner-is.html Please contact me when you get a chance so I can send them off!