D is for Doctor 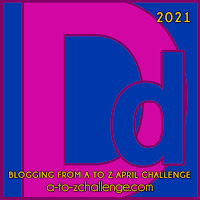 In the original version of  You're A Good Man Charlie Brown, in between production numbers they would run a series of vignettes that were generally taken directly from Peanut's cartoons.  In one such vignette Linus and Charlie Brown are discussing an information form they had to fill out for school.  Linus says to Charlie Brown when they asked for family physician I wasn't sure, so I just wrote down Dr. Seuss.
The bit speaks for multiple generations of children that Theodore  Seuss Geisel delivered the best medicine to through his auspicious career as a children's author and illustrator. 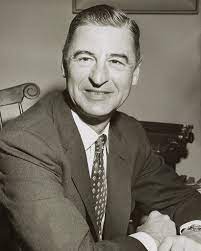 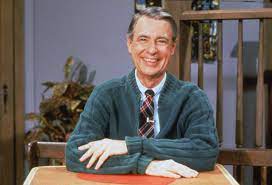 That's what I thought. 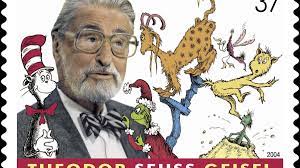 That's more like it.
Years lived before 1921: Seventeen
Years lived after 1921: Seventy
"It's fun to have fun you just have to know how" - The Cat in the Hat.
Using a combination of poetry, linguistic calisthenics, an out of this world imagination and the artistic talent to match Dr. Seuss knew how to have fun and share it with the world. Geisel  shared this fun with his readers writing over 60  books over 50 years while employing various pseudonyms.  His work lent itself quite nicely to the television as well as the movies. Everyone seems to have a favorite Dr. Seuss story.  For me. it's Green Eggs and Ham.  I loved reading it as a kid and that joy was only surpassed by the joy I had of reading it to my own kids.
When I think of Dr. Seuss I think of Beginner Books which has the slogan "I can read it all by myself". So I think it is very appropriate to show a video of a child doing just that with the book In a People house.

A to Z Archives: Dr, Seuss and More at HSD. Written in March of 2011 for Dr Seuss' birthday, this post is more about people with common ties with Geissel, such as the nickname Ted, the title Dr. being born on March 2nd or in 1904.

Born on March 2nd and 10 Songs at Random Acts of Roller.  When I wrote Born on March 2nd, I did not realize I had done pretty much the same thing 10 years ago in one of the sections pf Dr. Seuss and more. 10 songs contains a song featuring  Allen Sherman voicing the Cat in the Hat in the original television special.

Email ThisBlogThis!Share to TwitterShare to FacebookShare to Pinterest
Labels: 1921, Blogging A to Z, children's literature

I missed out on the whole Dr Seuss thing (wrong country, wrong time), but I loved Peanuts and the film. So thanks for all the extra information!
Good luck with your A to Z
Jemima Pett

I felt badly that some decided to brand him as a racist around his birthday earlier this year because of some pictures in a couple of his lesser-known works. The drawings were a product of their time, and no doubt he would have changed them at some point had he been alive, but attacking him at a time he couldn't defend himself was in bad taste.

I was a bit old for Dr. Seuss, but my cousins weren't, so I read a good number of his books. They were fun and funny and taught valuable lessons.