P is for Prokofiev 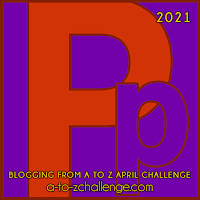 Last year in my A to Z challenge on my blog Random Acts of Roller. My theme was State Capitals.  I stated in my introduction ...

My Theme will be Capitals. Due to the random nature of my blog, and specifically my mind, each entry may only be somewhat related to the capital mentioned. For example, it is entirely possible that Friday April third's entry will feature the Krispy Kreme themed love song I wrote in 1995 because I wrote it while living in Columbia, South Carolina where I encountered my first  Krispy Kreme.

I mention that here. because today's post about Sergei Prokofiev will tell you probably a lot more about me than Prokofiev. But let's at least start with Prokofiev. 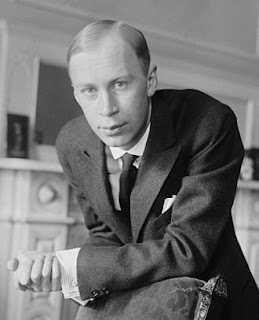 Years lived before 1921: Thirty
Years lived after 1921: Thirty Two
Sergei Sergyevich Prokofiev was born in April of 1891 in the Ukraine. . Sergei and I have something in commo that we both share the first name of our father but not our grandfather.  The way you can tell this with Prokofiev is that according to his Wikipedia page his father's name is Sergei Alexeyevich  Prokofiev. In Russian the 2nd name is the patronymic name which means it is derived from the father's name.  Boys names end in -ovich or -evich  and girls  patronyms  end in -ovna or -evna.  So Prokofiev's Dad's name was Sergei and  his paternal grandfathers name was Alexei. The way you can tell it with me, is cause I'm telling you. You'll have to take my word for it, as I don't have a Wikipedia page.
I first became aware of the music of Prokofiev was when I was a kid watching the Disney version of Peter and the Wolf. It is narrated by actor Sterling Holloway best known as the original voice of Winnie The Pooh. Different instruments play different characters in the folk tale. 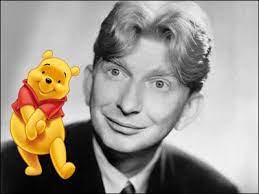 Sterling Holloway
Years lived before 1921: Fifteen
Years lived after 1921: Seventy-one
Winnie The Pooh aka Edward Bear
Years lived before 1921: zero
Years lived after 1921:100+
My family watched a lot of Disney, but we also listened to a lot of Alan Sherman also to a lot of the Boston Pop's conducted by Arthur Fiedler. In 1964 Sherman, Fiedler and the Pops produced an Album called Peter and the Commissar which is a parody of Prokofiev's Peter and the Wolf.  This was a family favorite and I was overjoyed to see it available on Spotify.
The next time I encountered Prokofiev was in the early 1990's I was living in Russia as a Southern Baptist missionary.  My job was to teach English classes and help start a student ministry.  In that capacity I got a lot of invitations from my students to experience traditional Russian culture.  I got invited to a a concert one afternoon and it was some sort of adaptation of Rome and Juliet.  As I watched the performance I realized that the instruments were kind of telling the story not exactly like Peter and the Wolf but there were some similarities.  At the break I looked again at the program and read in Russian that the composer had also writeen something called Peotr y Volk which in English is Peter and the Wolf.
Here is the London Symphony Orchestra playing a famous selection from Romeo and Juliet ...
Well that was a more random look at Prokofiev.  I hope you enjoyed it.  Tomorrow we'll have to mind our p's and q's as we are dealing with royalty.  For more of the A to Z challenge click here.
Posted by Home School Dad at 4:29 AM

Email ThisBlogThis!Share to TwitterShare to FacebookShare to Pinterest
Labels: 1921, Blogging A to Z, Random Postings, Russia

Amazing connections you are making through the posts. That must be a lot of research.